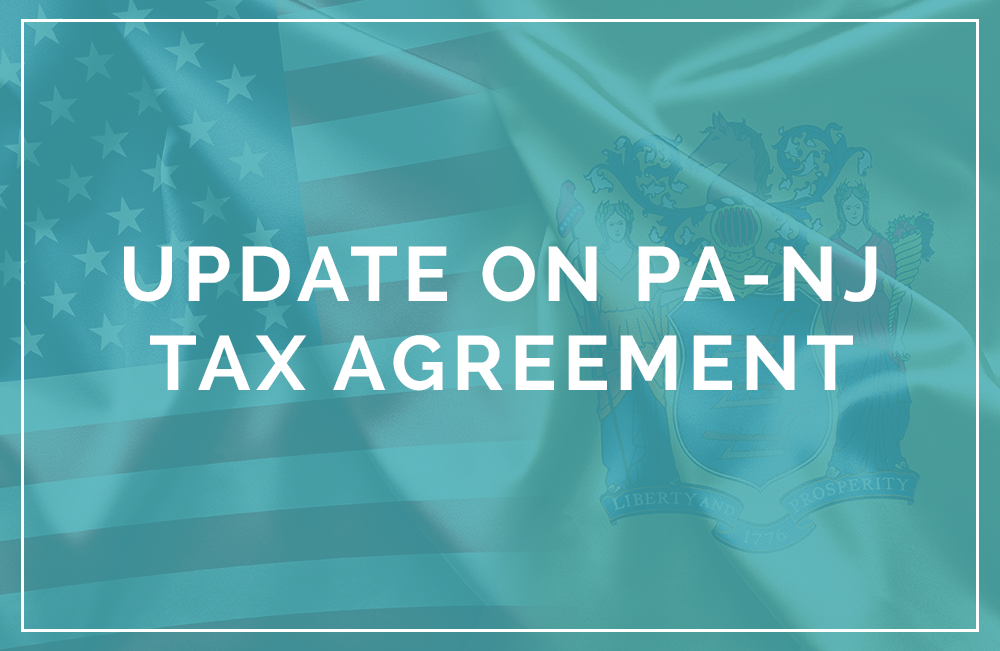 Note: As of November 22, 2016, Governor Christie elected not to move forward with ending the PA-NJ Tax agreement.

In early September 2016, New Jersey Governor Chris Christie announced that he would be ending a nearly four-decade old tax agreement with Pennsylvania. Under this agreement, New Jerseyans and Pennsylvanians working across state lines were allowed to pay taxes where they live, rather than where they work. The change is anticipated to go into effect January 1, 2017 and will affect income earned beginning that tax year. Ending the deal will create a higher tax burden for residents of Pennsylvania and New Jersey alike.

Let’s briefly compare the tax rate structure between Pennsylvania and New Jersey. Pennsylvania taxes income at a flat rate of 3.07%, regardless of filing status. New Jersey, however, has a graduated tax rate system, where residents pay as low as 1.4% and as high as 8.97% based on income amounts. The lower a taxpayer’s income, the lower the tax rate will be, and vice versa. With that said, there are two primary groups who will pay more in taxes in the upcoming years.

The same can be said for any Pennsylvania residents commuting to New Jersey for work and earning high amounts of income. This is due to New Jersey’s graduated income tax system. As another example, let’s assume that a married couple lives in Pennsylvania, works in New Jersey, earns $1 million, and files a joint income tax return. Running through the calculations show that the Pennsylvania tax due on this income would be $30,700 based on the flat tax rate of 3.07%. The New Jersey income tax would total to $72,478, however, because of the state’s graduated tax rates. The difference between the two states is $41,778, which is more than double the amount the Pennsylvania residents should be paying. Clearly high income earners living in Pennsylvania and working in New Jersey will also be hurt by the decision to end the tax agreement between the two neighboring states.

Unfortunately, many taxpayers in both New Jersey and Pennsylvania will see their income taxes rise in the coming years as a result of this action. For an in-depth analysis of the effects of the Governor’s decision on your personal tax situation, please give your Alloy Silverstein accountant a call at 856-667-4100.

Ren is a Manager at Alloy Silverstein with a special interest in advising small businesses and high net worth individuals. He is a member of NJCPA (New Jersey Society of CPAs), AICPA (American Institute of CPAs), and PICPA (Pennsylvania Institute of CPAs). Ren was recently named a "30 Under 30" by the NJCPA and one of the “40 Under 40” by Southern New Jersey Business People. Follow Ren on Twitter at @R3CPA or if you’d like to know more about how Abacus Payroll, Inc. or Alloy Silverstein can help your business, please call us at 856-667-6225 or Email us.