Classify correctly or pay up.

New Jersey Governor Murphy signed a package of bills into law this week in an effort to hinder the growing trend of worker misclassification in the state of New Jersey.

While you may not find yourself in the percentage of employers who are purposefully misclassifying as a way to avoid taxes and worker protections, it is easy enough to accidentally misclassify your workers as contractors and still be faced with steep penalties and the hassle of extra paperwork.

In addition to the existing fines and penalties for misclassifying employees and independent contractors, the new bills introduce the following:

The controversial bill (S4204) that would have redefined independent contractors and emulated California’s momentous gig worker law was not included in this January 20, 2020 package. While Bill 5843 will take effect in three months, the rest are effective immediately.

A Recent History of Misclassification

In 2018, Governor Murphy commissioned a Task Force on Employee Misclassification to evaluate the state of worker misclassification among employers in a bid to end unfair labor practices. The final report released in July 2019 revealed that over 12,000 NJ workers were found to have been misclassified in 2018 alone, representing $462 million in underreported wages. The report states that misclassification has grown since 2000, costing the state tens of millions of dollars every year since then in lost state income taxes and employment and disability contributions.

Some employers may purposefully misclassify to avoid paying taxes, overtime, benefits, unemployment, and workers’ compensation. If misclassification was deemed to be intentional, there could be up to $1,000 in criminal penalties per misclassified employee, and up to 1 year in prison. The person who made the error in misclassification can also be held personally liable.

Now that misclassification is being evaluated under a microscope, it’s important to familiarize yourself with New Jersey’s ABC Test to make sure you are correctly classifying your employees and contractors. The ABC Test has been adopted to help employers determine employment status. A worker is presumed an employee unless the employer can demonstrate all three components of the ABC Test:

A – The individual is free from control or direction over the performance of the work  (i.e., they are not supervised, compensated based on performance, or compelled to adhere to a set schedule); and

B – The service is either outside the usual course or nature of the business or is completed off the premises of the business  (i.e., the work in question is not an advertised service of your business); and

C – The individual is customarily engaged in an independent trade, occupation, profession, or business  (i.e., the worker has clients or customers in addition to your business). 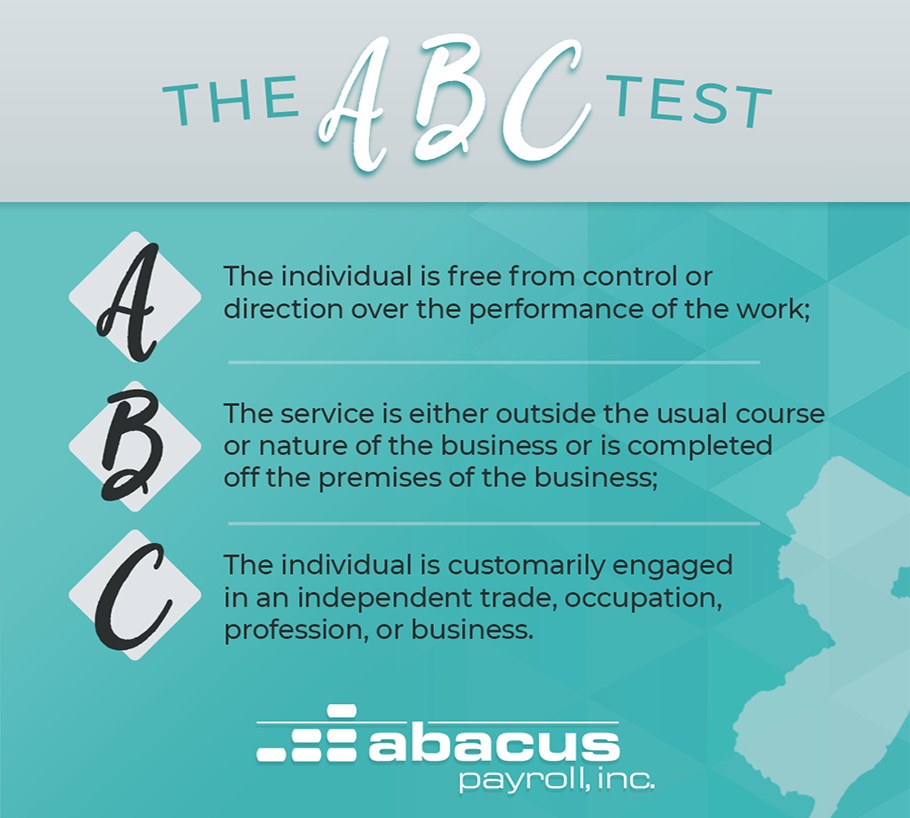